When discussing planetariums, we can often encounter the term "Fulldome". What does this term mean? And what does it have to do with planetariums? 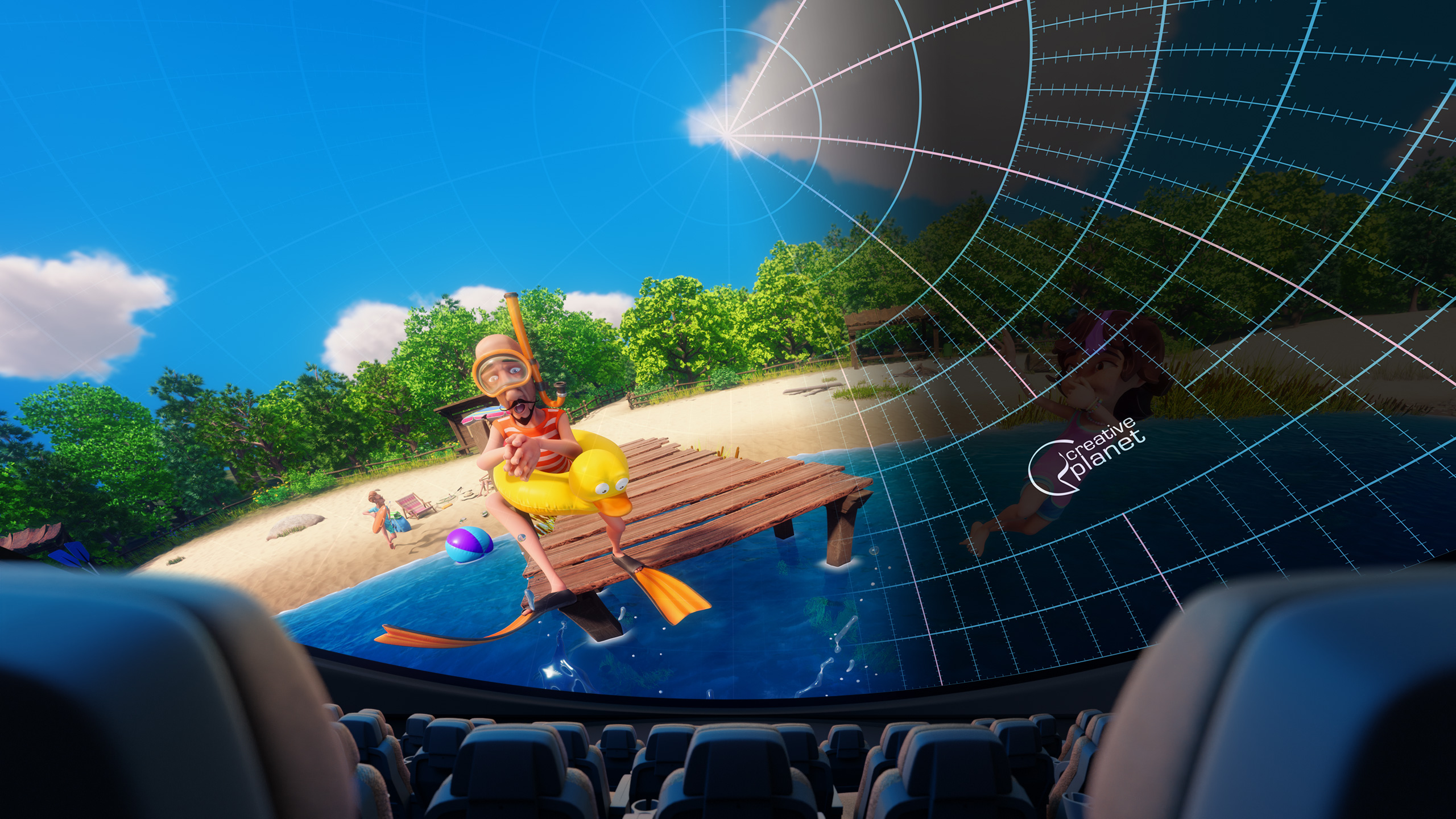 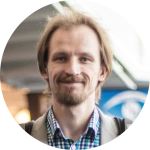 When discussing planetariums, we can often encounter the term “Fulldome”. What does this term mean? And what does it have to do with planetariums?

A common element in almost all planetariums around the world is a hemispherical screen surrounding the viewers. Since the times when the first planetariums came into existence, such screens have been used to project the image of the night sky using star projectors created specifically for this purpose. Although they are today much more advanced than those from almost a century ago, star projectors are still used in planetariums. It is believed that they allow for the most faithful representation of the image and feel of the night sky. Additionally, over the past few decades other technologies have been developed that have expanded the capabilities of planetariums. One of the areas of this aforementioned development is the technology enabling us to cover the entire hemispherical screen with digital image. This is what is known as fulldome technology.

Technically speaking, the term fulldome describes the specific manner of transferring various surroundings (e.g. forest or space) to hemispherical screens used in planetariums. The representation of those surroundings should be displayed in such a way that the viewer feels immersed in them and has the impression of being transported to another place. There are a few terms connected to fulldome technology and each of them means something slightly different: If we use projectors to display images covering the entire dome, we call it fulldome projection. The standard format of graphic files used to create and store images for such projection systems is called fulldome format. The graphic materials using this format are fulldome materials. Among these materials you can find pictures, clips and animations, as well as full shows and films produced with the use of fulldome technology. 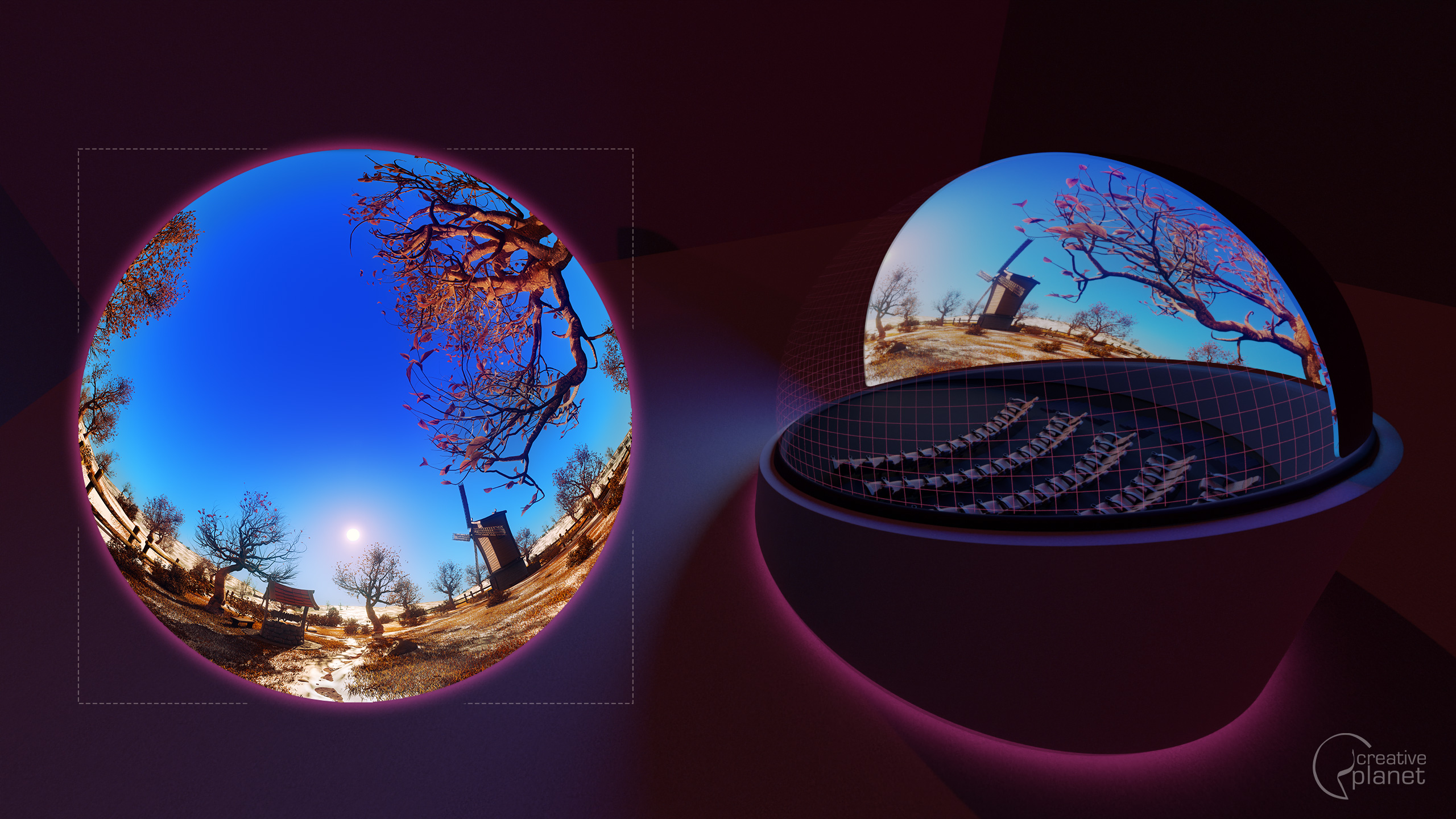 The Fulldome format is a square frame with a circle inscribed in it. Anything outside of this circle is not displayed, while the contents inside it will, in turn, appear on the screen.

What is, however, the difference between the planetarium fulldome format and the standard film format, for example Full HD? Firstly, it’s the shape. The Full HD format is a horizontal rectangle, as opposed to the fulldome format, which has the shape of a circle. To be exact, it should be a circle but this is not entirely possible because the popular graphic formats do not support such round-shaped files. For this reason, the Fulldome format is a square frame with a circle inscribed in it. Anything outside of this circle is not displayed, while the contents inside it will, in turn, appear on the screen. The perimeter of the circle outlines the edge of the screen – the lower part of the circle is the front of the screen, while the upper part is at the back. You can imagine such a frame as a hat that you grab on both sides and “pull over” your head. The inside of this imaginary hat reflects the way in which a fulldome image is transferred to the screen of a planetarium. This brings us to a more significant difference, which is the difference in the content of these two formats. And this difference is huge.

Let’s imagine we are showing a regular movie in a planetarium. Of course, a significant part of the planetarium screen will remain unlit. The film will be visible only at the front. The part of the screen which remains dark marks the difference between the content of fulldome material and regular cinematic footage. A filmmaker, when creating individual rectangular shots, consciously adjusts the frame – the line between what they want the viewer to see and what is not visible in the shot. In case the same film was to be shown on the dome of a planetarium as fulldome, it would be necessary to abandon the concept of a frame and expand the camera view in order to show everything that, in a classic movie, is left outside of the frame, and to cover the entire dome with such an extended, but not stretched image. Therefore, there is no way of converting a regular film into a fulldome film. During every production for a planetarium, each image, animation or film has to be designed as a fulldome film right from the start. 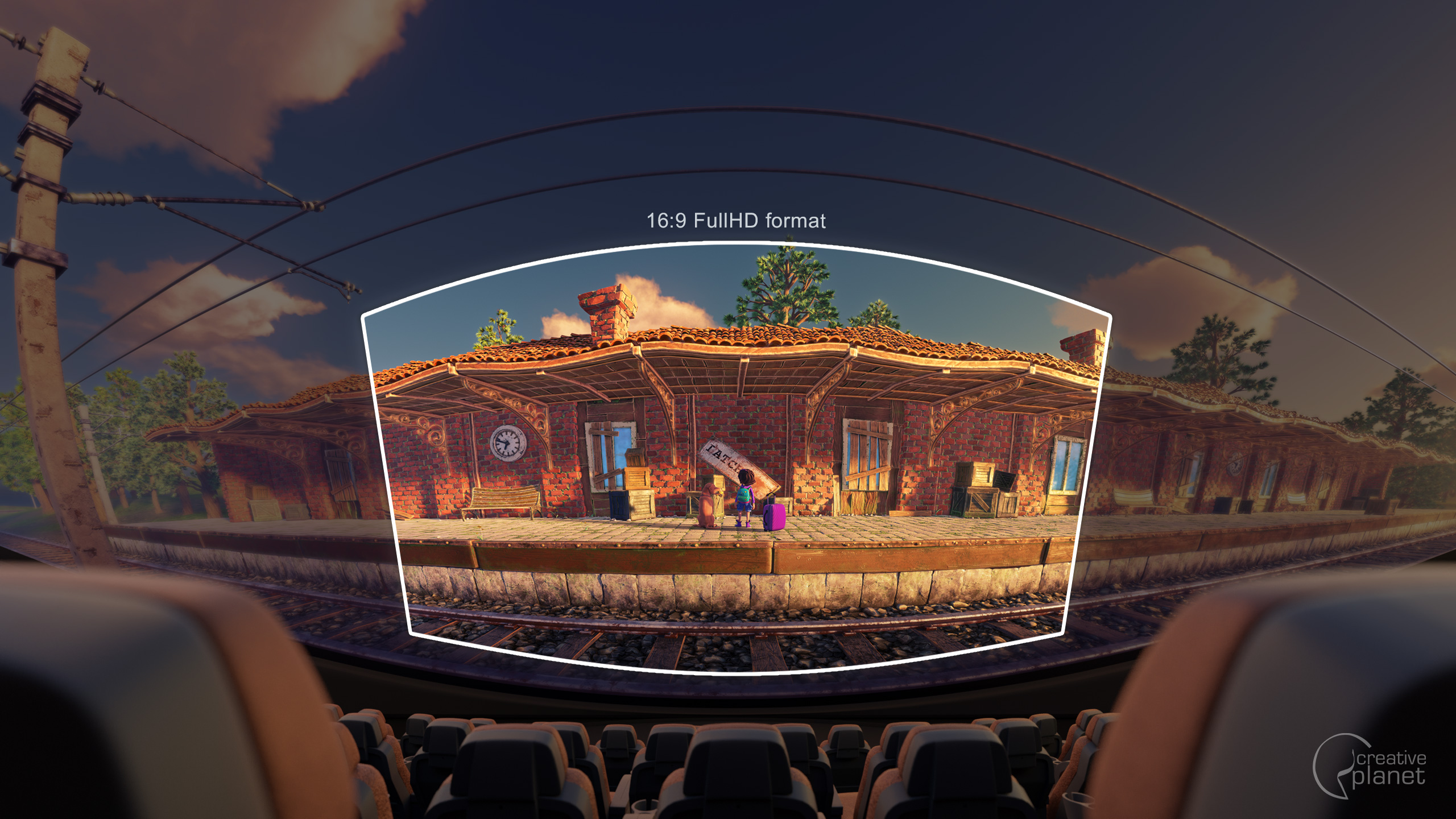 The view extension is also connected to the number of pixels. If we stretched a Full HD film over an entire dome, the ruined image geometry would not be our only issue. The quality of the film would drastically drop in comparison to the quality on a flat screen because every single pixel would be stretched. There has to be more of them in a planetarium than in a cinema. Much, much more. Films for planetariums meeting the highest quality standards are currently produced in 8192px x 8192px resolution. That’s 25 times more pixels than in a rectangular Full HD film.

Despite many aspects in common with traditional movie production, it is a separate cinematography field creating completely new challenges for production companies. At Creative Planet, we specialize in production of feature films for planetarium screens – one of the most advanced forms of using Fulldome technology. 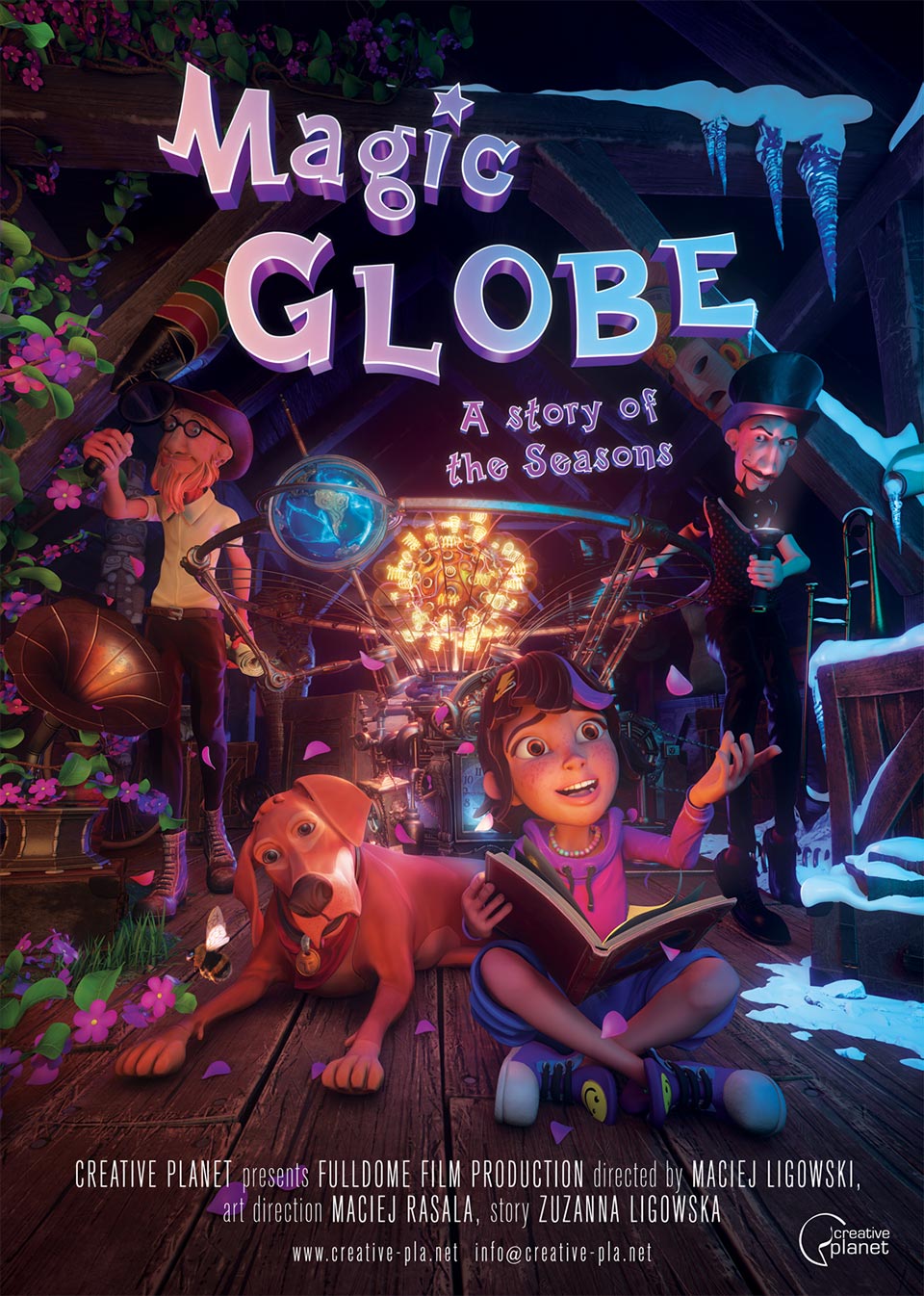 Produced by Creative Planet in 2020

Magic Globe’s engaging story has a clear educational structure, designed to interest and challenge children from 5 to 12 years. Children can recap their prior knowledge and/or learn new concepts while the story carries everyone forward together, making it perfect for mixed-ability audiences. 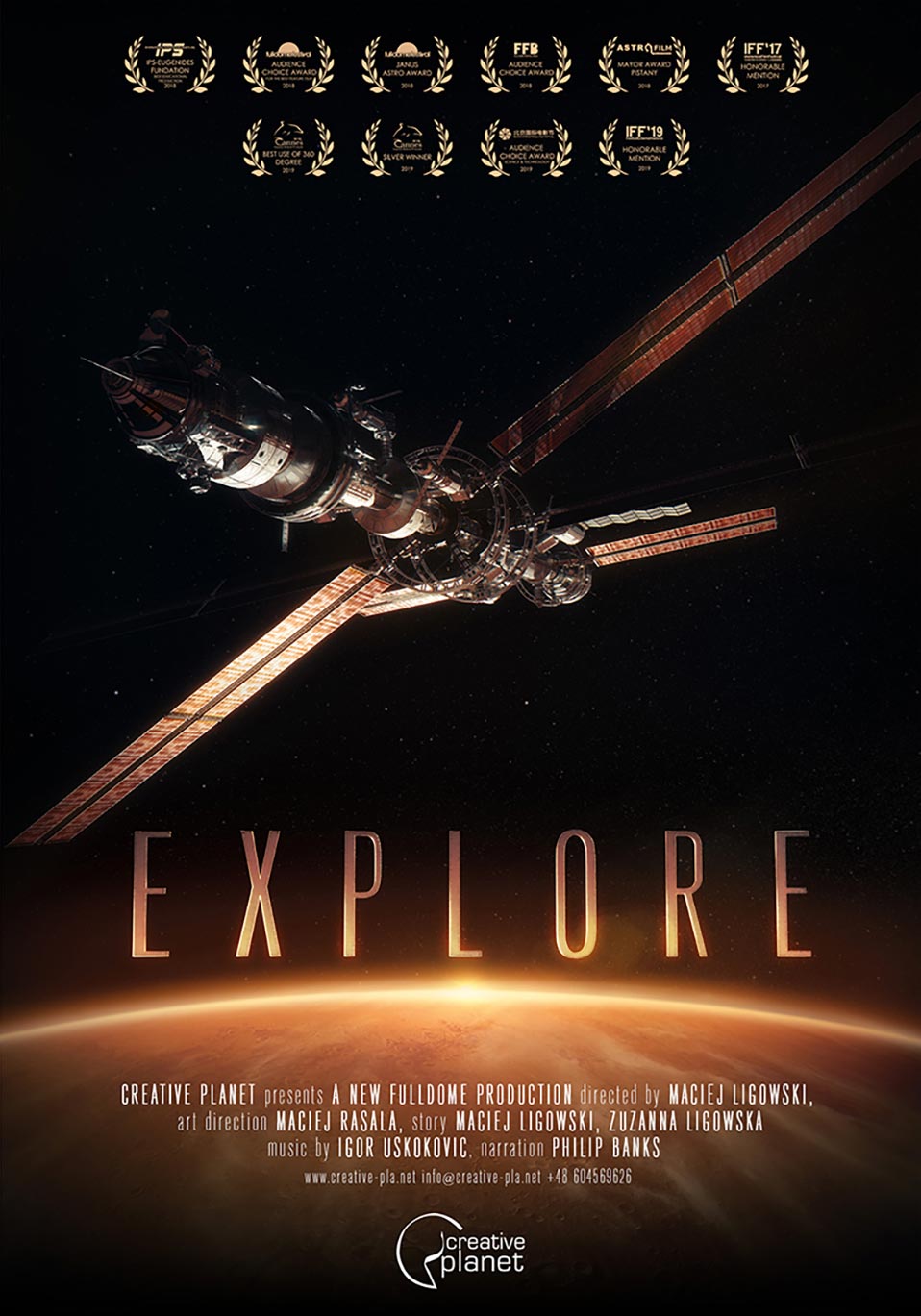 Produced by Creative Planet in 2017

STORY:Explore is the latest production by Maciej Ligowski – Executive Producer of Dream To Fly – continuing the trend of bringing visual excellence under the dome to enhance the immersive experience of the public.

The story centers around the motive of human travel to Mars, but the show presents and explains a much broader selection of science including history of astronomy, geocentric and heliocentric models, Kepler laws of planetary motion, or orbital maneuvers.

We’ve decided to share with you an asset pack full of appealing visuals, along with some suggestions on how they might be used to create impressive planetarium shows.